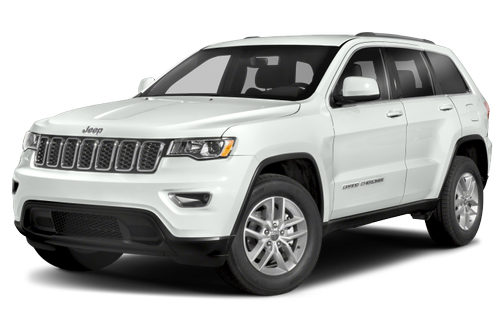 Our 2019 Jeep Grand Cherokee trim comparison will help you decide.

The verdict: The 2019 Jeep Grand Cherokee is a solid, stylish SUV that’s starting to show its age — no surprise, given the current generation has been around since 2011, with only a cosmetic refresh in 2014.

Versus the competition: The Grand Cherokee offers a heavy-duty four-wheel-drive system — a rarity for mid-size SUVs — and significantly higher maximum towing capacity than most of its competition. Where it lags is in areas that are more important to most buyers, such as interior refinement, fuel economy and standard safety tech.

We tested a Grand Cherokee Limited X, which is a mid-level version of the SUV. The Limited X takes a regular Limited and adds a performance appearance package, giving it the look of its much faster — and much more expensive — siblings. (Sort of like when owners of the Dodge Challenger, a Grand Cherokee platform-mate, add Hellcat badging to their V-6 cars — and it’s always a V-6.)

How does an SUV that hasn’t seen much more than aesthetic tweaks keep up with the changing times, especially in a crowded field that features a number of new (old) names like the Honda Passport and Chevrolet Blazer? Compare them here, and read on for the answer.

Let’s start with the good news. The Grand Cherokee has been Jeep’s flagship SUV for decades, and it still mostly looks and feels the part. It’s aesthetically pleasing and has a feeling of solidity, backed up by ride quality that’s rarely — if ever — flustered by bumps or road imperfections. Some of that feeling is due to a suspension that, in non-performance models, is focused on giving the driver the opportunity to go off-road with confidence. An optional four-corner air suspension adds up to 4.1 inches of lift at the touch of a button for when the going gets extra-tough.

That’s backed up on most versions by three available four-wheel-drive systems (SRT and Trackhawk models get a fourth, entirely different 4×4 system that’s more track- than trail-focused). The base 4×4 system is the basic full-time Quadra-Trac I system, found on the base Laredo. Next is Quadra-Trac II, which adds a two-speed transfer case and hill descent control, then another version of Quadra-Drive II that adds an electronic limited-slip rear differential.

The parts bin at Fiat Chrysler Automobiles has done wonders for the Grand Cherokee’s powertrain. Standard equipment for most models is a 3.6-liter Pentastar V-6 that’s good for 295 horsepower and 260 pounds-feet of torque. The numbers don’t blow you away, but in our test vehicle, the engine provided solid, linear power when paired with an eight-speed automatic transmission. There wasn’t any noticeable hesitation during passing maneuvers or lag from a standing start. An available 5.7-liter V-8 boasts 360 hp and 390 pounds-feet, and a 6.4-liter V-8 with 475 hp and 470 pounds-feet is standard in the SRT performance model. If you want an absolutely nutty SUV, opt for a Trackhawk and its Hellcat-derived 6.2-liter supercharged V-8, which is good for 707 hp. All are mated to eight-speed automatic transmissions tuned for their respective engines.

The parts bin also contributes to a familiar and well thought-out interior, with a user-friendly control layout for everything from the four-wheel-drive system to the climate controls. There’s also a Uconnect multimedia system with a 7-inch touchscreen standard on the Laredo (every other trim level gets an 8.4-inch touchscreen). Uconnect has long been one of my favorite multimedia systems for its graphics quality and ease of use, and that hasn’t changed with the current generation. Apple CarPlay and Android Auto are standard with either display.

We didn’t test the Grand Cherokee’s towing prowess, but its maximum towing capacity — 6,200-7,200 pounds, powertrain depending — is significantly higher than most vehicles in its class.

Now for the bad news: The Grand Cherokee was the lowest-scoring model in our recent 2019 Mid-Size SUV Challenge, for which I was a judge. The Grand Cherokee tied for last in fuel-economy and noise rankings, and it was next to last in the cargo test and our judges’ value ranking. In eight other categories, the Grand Cherokee was average or below average. We called it “death by a thousand cuts” when discussing its finish.

Fuel economy is an issue. The EPA rates the V-6 Grand Cherokee at 18/25/21 mpg city/highway/combined with four-wheel drive (rear-wheel-drive models get the same combined rating but a 1-mpg boost in city and highway numbers). Our mileage test came in slightly higher than its combined rating at 22.2 mpg, but still near the bottom of our field of six. The V-6 model is also the only Grand Cherokee that Jeep recommends running on regular 87-octane gasoline. The 5.7-liter V-8 can run on regular, but Jeep recommends mid-grade 89-octane gas, and the SRT and Trackhawk require premium juice. The 2019 Nissan Murano was our mileage test champion, and it has an EPA rating of 20/28/23 mpg with all-wheel drive. The overall winner of our test was the 2019 Hyundai Santa Fe, which has similar EPA ratings to the Grand Cherokee at 19/24/21 mpg but finished our testing with an average of 25.1 mpg.

Noise is also a problem with the Grand Cherokee, though not from outside factors. All three of our judges noticed a low-frequency hum while driving that can be extremely grating; it caused me more than one headache. Fortunately, other noises don’t intrude at levels noticeably greater than in the Grand Cherokee’s competitors.

Grand Cherokee interiors are also something of a mixed bag. Along with the praiseworthy control layout and multimedia system, the leather in our test vehicle felt nice. But the dashboard looks like a sheet of black plastic, the backseat doesn’t recline or slide, making it feel extra cramped (the hard front seatbacks don’t help), and there are no cargo-area releases to fold the backseat (like all five of the Jeep’s competitors in our Challenge had).

Lastly, driving dynamics pay the price for the off-road capabilities of most Grand Cherokee models. Whatever handling benefits are gained by the rear-wheel-drive nature of the Grand Cherokee’s platform — most competitors have front-wheel-drive platforms — are negated by the significant body roll our Grand Cherokee exhibited in spirited driving; it felt like a Toyota 4Runner with slightly better manners. For better or worse, there’s an inescapably trucklike feel to the Grand Cherokee, at least without the optional air suspension.

The Grand Cherokee is rated five stars overall by the National Highway Traffic Safety Administration, but the Insurance Institute for Highway Safety rated it marginal (out of a possible good, acceptable, marginal or poor) in the driver’s-side small overlap front crash test. Most of the Jeep’s IIHS class rivals earned a rating of good in this test. (The Grand Cherokee has not yet been subjected to the passenger-side test.)

In our own Car Seat Check of the Grand Cherokee, we praised its ability to fit three child-safety seats side by side in the backseat, but it managed no more than a B grade in any of our seat-specific tests.

Some advanced safety features — forward collision warning and automatic emergency braking, lane departure warning and prevention, adaptive cruise control and blind spot warning, but not things like lane-centering steering or 360-degree camera systems that others in the class offer — are available on all but the lowest Laredo trim for 2019 (all 2020 models can be equipped with these features regardless of trim), but the key word here is “available.” As competitors move to make advanced safety tech standard, Jeep continues to charge shoppers more for it.

The Elephant in the Room

Value is where the Grand Cherokee struggles, especially with its ostensible competitors sometimes costing thousands — if not tens of thousands — less. Our Grand Cherokee stickered for more than $52,000 but came in last in our Challenge (won by a Hyundai Santa Fe that didn’t even total $40,000). The Grand Cherokee may start out around $30,000, but to get a “nice” trim that competes with premium offerings from, say, Lexus, shoppers might have to spend $55,000 to $60,000 or more. Meanwhile, the SRT is nearly $70,000 and a Trackhawk will run you close to $90,000 — before options.

Weirdly, the two most expensive Grand Cherokees are also likely the best value propositions, as similar performance from an SUV usually involves letters like AMG (from Mercedes-Benz) or M (from BMW), along with exorbitant six-figure prices. It’s the mid-level and luxury trims of the Grand Cherokee that will most benefit from a full redesign to make them more competitive.

So far so good . Lots to learn re electronics.

This vehicle met all our needs. Been 20 yrs since we bought a car. Lots to learn. Plan to dinghy tow behind RV. Easy for spouse to get in & out due to knee problems.

Not your typical Chrysler product.

Comfort and attention to detail is outstanding. Fuel mileage is fair and the only minor issue was the steering wheel was about 4 degrees from center.

A great looking SUV for the money. Performance, reliability and styling all in one. I’m on my 7th Jeep and this Grand Cherokee Summit beats all the luxury brands I’ve owned hands down.

Rating breakdown (out of 5):
1 person out of 1 found this review helpful. Did you?
Show full review
See all 221 consumer reviews